The Self is Continuously Formed from the Outside In

I have for years now observed that the person I am is determined by the place in which I am. To a distressing level, frankly. Certain ways of being seem inaccessible in some places, utterly. For example in the American suburbs, which is one of the places I least like the person I am, I can’t even access the sense of melancholy of longing for the wilderness I might feel in the city. Nor the vasty empty fear of the actual wilderness. In one neighborhood of San Francisco (Noe Valley) I can hardly enter the mood of another (the Presidio).

We, Westerners, think, or mostly like to think, that the self comes from within and finds expression through interactions with the exterior world. A soul, embodied. A self interacting with society. But I think that it’s not like that. I think the self is formed from the outside in. The brain forms the mind. The body forms the brain. Physical interactions form the body. Society regulates physical interactions and sometimes the body directly, as in judicial corporal punishment, medical regulations, restrictions on drug use, or prescriptions of drugs and treatment for those deemed insane, which is not always those who themselves suffer from their symptoms, as with the punitive psychology of the 1950s deployed against hysterical women in the US or political subversives in the USSR. 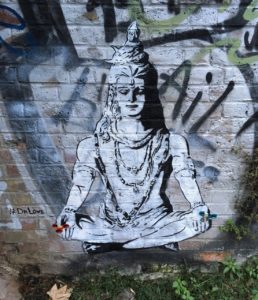 Art on the wall of the Regent's Canal in London depicts an ascetic meditating with fidget spinners.

I make this sound all neater and more systemic than it really is. Beyond the premise that brain forms mind, body forms brain, I am quite uncertain of the chains of causation. I know there is neuroscience around this stuff and perhaps some parts of what we call personality are genetically predetermined, and no amount of societal pressure can really undo or alter them. For example the neurodiversity of autism spectrum or ADHD feels more like how tall you can grow[1], rather than something like how muscular you are which you can alter with diet and exercise and even, if you chose, external hormones--the use of which is regulated by society so here is a layer of abstraction above, acting on a layer of abstraction below.

Things at the level of neurological inclinations are much grosser and more general than what we normally think of as IDENTITY. Even around the constraints of our physical (which includes neurological) limitations we form an identity. That identity emerges from interaction with the entire embodied (and higher abstraction beyond) environment, instead of arising spontaneously from an inherent seed of self (e.g. a soul) that predetermines it. Though now that I say it, what even is the difference. Any soul which could manifest so variably is so undetermined or vast in potential it’s almost indistinguishable from non-existence.

And here by long-winded process I appear to have come around to Buddhist principles. No-self and form is emptiness.

This identity, moreover, is not formed once through one’s upbringing and then fixed, but changes continuously through ongoing interactions.[2] I don’t wish to posit a complete determinism. For example, I can choose to change my body through bodybuilding, and experience the world differently, because of my physical interactions with it. Suddenly a hill I avoided on my path is easy to climb. I see a different set of people on the new path. I can choose to talk to them, enter into new friendships and social relations, and start living under different norms. I can move to (or even just visit) a different country and be steered by the pressures of different geography, weather, and architecture to interact with different people, make other friends, and live under yet different norms, and start to think of myself as a new person, perhaps even without noticing the change as it is happening. But these dramatic changes can also happen entirely by accident. I might fall ill or have an accident and not be able to leave my house for months and lose my regular connections with friends and environment, become obsessed with the birds I see outside the window, research birds on the internet, join a forum for bird watches, and seemingly suddenly and almost by accident, I have a new identity of bird-watcher.

[1] But on revision, I wonder if this is even a good example of a predetermined constraint, since human growth hormone can change how tall you’ll grow, and tallness is determined by many factors, which while mostly outside of direct control of the individual who is or is not tall, are hardly all genetically predetermined.

[2] My friend and colleague Sara Klein reviewed an earlier draft of this essay and asked “[I]f we are formed through the external, how do you account for stark differences such as a racist and an anti-racist who grew up in the same place at the same time with very similar circumstances.” The last paragraph attempts to address her question, although I can’t account for it from the outset, I can over time.